skip to main | skip to sidebar

From the beginning, Humble Pile was a liberating experience for me. I was familiar with the concept and I had shitted in outhouses before but HP meant that for the first time their was a bucket in my very own bathroom. I never knew about all the trouble that toilets caused until I first heard the words "shit compost." First off, it just doesn't make sense to contaminate freshwater with your poop. Freshwater and poop don't mix. Then, you got this freshwater that has been processed in all these expensive ways so that it is potable. That processing uses tax dollars and a whole lot of petroleum-based energy. It is expensive water. Nope, no reason at all to poop in that. In this day in age, any freshwater is valuable. Unfortunately, the world is becoming a place where drinking water is scarce. Us Chicagoans think we can take advantage of the fact that we live next to the 6th largest lake in the world. Still, you can tell from any beach in Chicago when you notice the shoreline from year to year: the lake is receding; its water level is getting lower every year.

Not only does sewage treatment squander drinkable water but it also creates a lot of pollution in the form of waste solids. These aren't new discoveries. Ecological sanitation has been widely successful in Africa and Asia, particularly as a method of transforming shit into soil in places where there are high rates of waterborne illnesses and potable water is scarce. The world as a whole is already faced with major sanitation problems. Almost half of people globally don't have access to a sanitation system¹. The effect of global climate change is that these issues will become a reality for even more people around the world. A great place to read a little about this is an organization called Sustainable Organic Integrated Livelihoods (SOIL). They advocate for "ecological sanitation" too, although I prefer the term shit composting.

Mushrooms in My Bucket

Here's the shaggy mane mushroom, or Coprinus comatus. It moved in on our bucket early on, before many other decomposers had reached it. The shaggy manes mushrooms are growing out of the brown paper we had used to cover the top of the pile to absorb moisture. The black stuff behind them is actually spores that they have released over the pile. The older mushrooms that have already released spores are wet and inky looking. This is their method of dispersal, where the cap dissolves and the spores are released into the air. Some are so spent that they are just inky stems barely peeking out of the ground. Coprinus mushrooms start out looking velvety, hence the name, with a layer of delicate white fibers covering the cap and stalk. Their velvety fuzz becomes a mane of shag. Over time, these mushrooms grow again from the spores and the cycle of breaking down the organic matter below and creating rich soil continues.

There is something incredible about soil. It is full of space! A single tablespoon of clay is like a small galaxy of flat crystals stacked on top of each other, full of surfaces for stuff to attach to. For an ionic molecule, there is enough surface area in that tablespoon of clay to cover a football field! There's all sorts of things attached to the insides of clay bits. The same goes for the leaf litter and soil in the backyard. It's a whole world contained within the universe of a few square inches. There's spiders, red wigglers, millipedes, moles, grubs, beetles, ants, mice and tons and tons of fungi. All these guys live inside all the crevices and nooks in the litter layer that they make their home. Below the leaf litter, if you dig around under there, you'll find the layer of organic matter, the humus (hyoo-miss). Humus comes from all the pooping going on. The humus appears because the leaf litter is eaten down after time, by smaller and smaller things all the time that eat the leaf bits into smaller and smaller pieces. After a while, the bits are so small that you get a rich, black humus that smells like excellent food. It's so protein-rich, in fact, that a person could survive on it if they got lost in the woods.

Ever tried composting kitchen scraps? If so, you might have read that you wouldn't just throw your scraps in the yard and hope that it breaks down. You have to mix your nitrogen-rich scraps with some source of fiber high in carbon, such as dry leaves, yard waste, newspaper, sawdust, napkins, ash, etc. The nitrogenous waste has a very strong smell. Once you mix the two together, stuff breaks down easily and you get a pleasant, mild compost-y smell. Poo is also high in nitrogen and organic matter, just like kitchen scraps.

That's what it all comes down to, eating and pooping. Detritivores eat the detritus, the decomposing organic matter, and turn it into soil. It's no coincidence that our poop and soil (detritivore poop) are often so similar in color. Both are things that used to be bigger and now are made up of very small bits stuck together. Both are things that are darker in color the more organic matter is present. Both have a rich smell: the more pungent the aroma, the more organic matter that has not yet been broken down. Poop and soil are made for each other.
Posted by Cardinal Boy at 11:30 PM No comments: 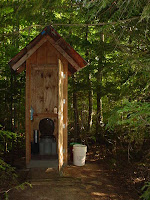 There is my bucket – adjacent to my now guest bathroom. I’ve been using this bucket and a few others, collecting them up and devouring sawdust. I kept my collection –about two months worth of buckets – off to the side in the woods. About two weeks ago I decided to freshen up my buckets and do a transfer, a dump along the tree line to reinforce (nutrient-wise) the sand “soil” along the shore line to support the tree cover. Taking a “short cut” (those buckets are heavy!) down a rise of about 15 feet of forest floor, I, of course, tangled a foot in some branches, tripped and toppled and you can only imagine – UGH and yuck-O! Stinky, sloppy, slushy, oh my gosh: Ugh. ( I was peeing in the buckets too) Burying that mess wasn’t so bad with available materials although I had to ward off my dog who has the common disgusting canine habit of rolling in stinky stuff. Would it mean anything to him to roll in MINE? Who knows but I really didn’t want to find out. Its one thing to wash out the ground in scat of a bear or deer from his fluffy furr but my own? Ew. Humanure definitely has its EW moments. Anyway, after the clean up, some how my bucket wasn’t as attractive as it used to be and I was inspired to make a system change - And really, the rim is so small and narrow to sit on anyway. My latest is a kind of human litter box-tray. Rather than poop directly in the bucket, and have to be intimate with all that plastic, I am now using the much more comfortable and healthy squat method into an ample and plush pile of sawdust and then dumping That in to the weekly collection bucket which I will transfer to the ground weekly! - Rather than a stinky bi-monthly chore of multiple buckets. I am really happy with this. Much softer, a much warmer welcome to the mornings.
Posted by hthr at 5:55 PM No comments: 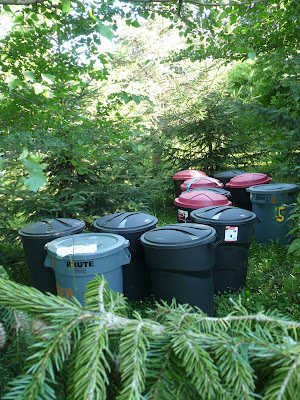 this was the cache until end of june. there is more now, and with the project wrapping up with an bonus month of collection, these remote woodlands will be peppered with bins of your soil transforming itself into what else? soil.
Posted by nettlesting@yahoo.com at 9:19 AM No comments:

a full bin getting picked up! 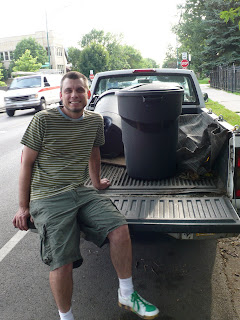 Posted by nettlesting@yahoo.com at 9:15 AM No comments:

a farewell, of sorts

Sadly, it had to be done. Or, perhaps it didn’t.

A choice needed to be made about my involvement with Humboldt Pile Chicago. I decided that I could no longer participate. Instead of talking about the rational for this decision, I’d like to share what this experience has contributed to my awareness of my self and my connection with the earth.

That’s just it “connection with the earth”; a phrase that is utilized profusely these days as we’re scrambling to find solutions to the complete mess we have made of our home. I have been sensing this loss, my deep loss of connection, but I couldn’t even begin to identify what that “connection” looked like, felt like. Well, my time with Test Hole definitely brought all that crap to light.

In the past few months, my perception of this loss has narrowed. Luckily, I have met new folks with a wealth of knowledge who have shown me that the earth is more powerful than I had ever imagined. Even under all of this urban toxicity, its rhythm is strong and generous. And the best part, your own body – no matter what size, color, scent or flavor – carries and creates an ingredient of that generosity everyday. How absolutely freakin beautiful is that!

My decision to quit was purely logistical. The honest conclusion: do I miss the Test Hole, not really. Do I miss my connection, yes. I would say that if I built a composting toilet outhouse in my backyard I’d definitely say adios to the indoor one. Also, if you’re going to poop in a bucket with multiple folks, it’s important to be on the same page about cleaning methods. It takes a lot of trust (and work) to share shit chores with a housemate.

This doesn’t mean that I’m through with composting my poop and piss; I’ll just have to find out what works for me as I reside in this system of a city. Gotta run and pee, maybe I’ll reach for a jar…
Posted by s.fink at 11:18 AM 1 comment:

i have been hearing about maggots in some of your bins - it is fly season afterall. houseflies seem to be everywhere. since i haven't run into this with my toilet or storage bin, i would suggest using more sawdust and dumping more often.
Posted by nettlesting@yahoo.com at 9:09 AM No comments:

you’ve probably been wondering what you can
possibly do to help prevent total systems collapse.

here is your answer: a poetically and practically perfect activity that will feed your feeling of joy, alleviate alienation, connect you to nature. yeah, we can actually save fuel, eradicate certain forms of pollution, save hundreds of thousands of gallons of water and create rich fertile soil rather than parched earth.

compost your shit and piss. hear us out.
sawdust toilets don’t smell.
no more dangerous than wiping.
close the nutrient loop.
operate differently.
billions of humans suck nutrients and
don’t give back to the dirt. change that now.
stop wasting live water.
stop sewage spills by composting your crap.
it’s fun. joyful. sensible.

A dance in 5 steps 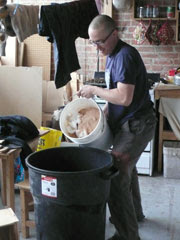 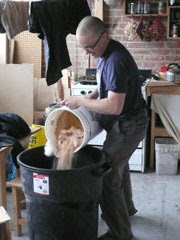 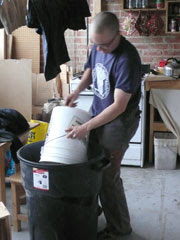 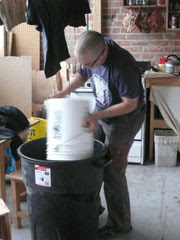 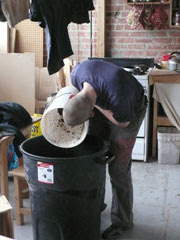